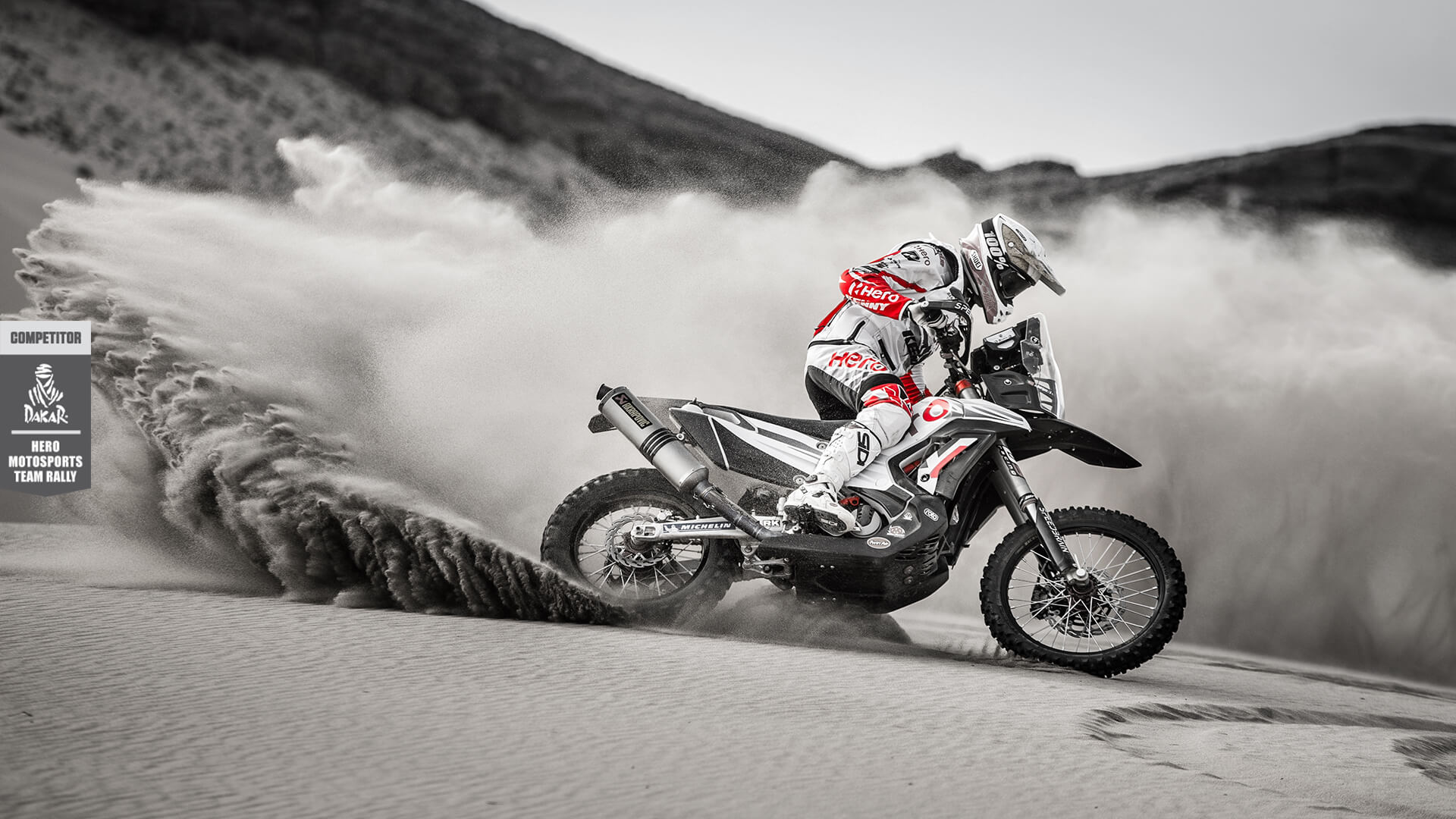 Ahead of our second appearance at the world’s most gruelling off-road rally, Hero MotoSports announced the Team for the Dakar Rally 2018. In addition to CS SANTOSH and Joaquim Rodrigues, the Team will field Spanish talent, Oriol Mena Valdearcos at the Dakar this year and expand its performance horizon.

The biggest rally-raid in the world, Dakar, for its 40th edition will cross three countries, starting with Peru on January 6, 2018, and travelling through Bolivia before concluding in Argentina on January 20, 2018. This edition is expected to witness participation of 500 competitors from 60 countries who will cover a gruelling stretch of almost 9,000 km. 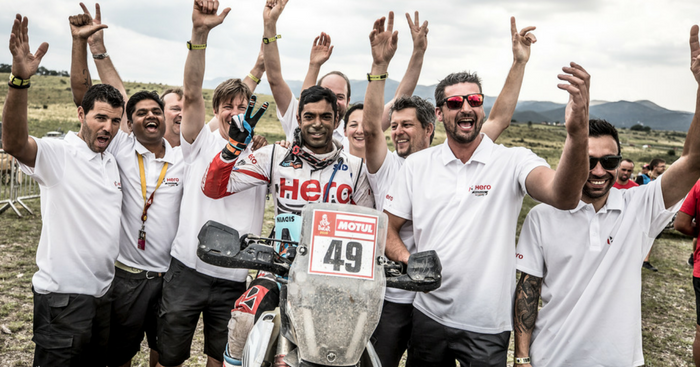 It was a glorious day at Cordoba as the Dakar Rally 2018 came to a grand end after a gruelling 14-day journey. For Hero MotoSports Team Rally, it was a particularly special day as they delivered their best ever Dakar performance. Oriol Mena impressed one and all to deliver an excellent 7th position finish in his debut Dakar while CS SANTOSH became the first and the only Indian rider to have finished the Dakar thrice 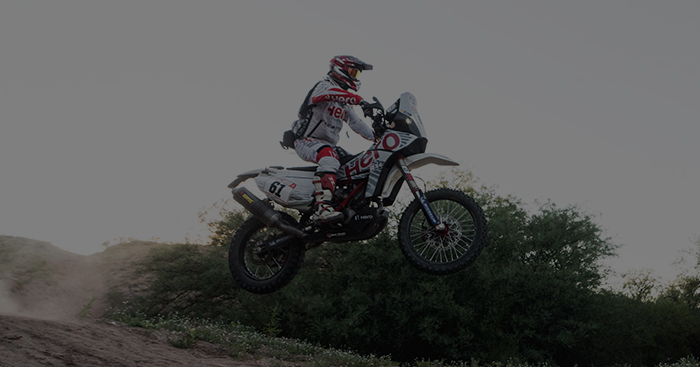 Both riders of Hero MotoSports Team Rally took on the stage with the sole objective of bringing the bike home without getting into any untoward incidents just one day before the final stage. Oriol Mena kept the pressure on to inch closer to his debut Dakar finish by placing 8th in the stage. Overall, he now stands at 8th position at the end of stage 13. CS SANTOSH also held his nerves and brought home a solid and steady stage for the team, finishing today at the stage at 33rd position, taking him to 34th position overall. 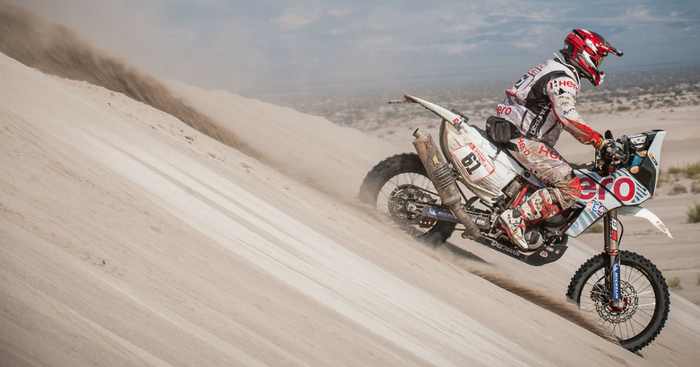 For the bikes, Stage 11 was the first leg of the Marathon stage as they covered a liaison of 205 kms and a special stage of 280 km to camp overnight in the Fiambala Mountains. Oriol Mena continued with his great form today as well to finish the first leg of the Marathon at 9th position, and 10th overall. CS SANTOSH played it steady to gain as much ground as he could in the last few remaining stages. He did really well to reach the bivouac to finish the stage at 33rd place, taking him to the overall ranking of 34 at the end of stage 11. 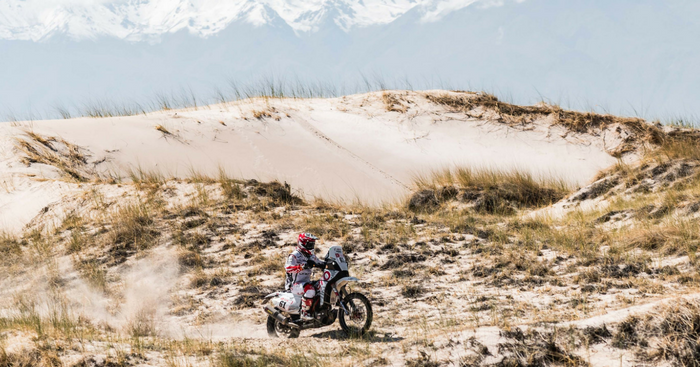 Dakar's most destructive stage sees our Heroes ride through

For the stage 10, the rally moved to the town of Belen from the overnight halt at Salta which was also an off day due to the cancellation of stage 9. Oriol Mena had a head start from the very beginning, consistently maintaining his top 15 position through the day, finishing the stage in a very commendable 4th position, his best Dakar stage yet, owing to his gritty performance and flawless navigation. He also stopped and called for rescue for a fellow rider who crashed in front of him, displaying excellent sportsman’s spirit. Overall he stands at the 14th position at the end of stage 10 breaking into the top 15 rankings for the first time.

Santosh started the stage quite well until he had a really bad crash in the second half of the stage that knocked him out for some time. With the help of a quick intervention from the team, Santosh managed to finish the difficult stage at the 44th position, helping him to finish at the 40th position overall at the end of stage 10. 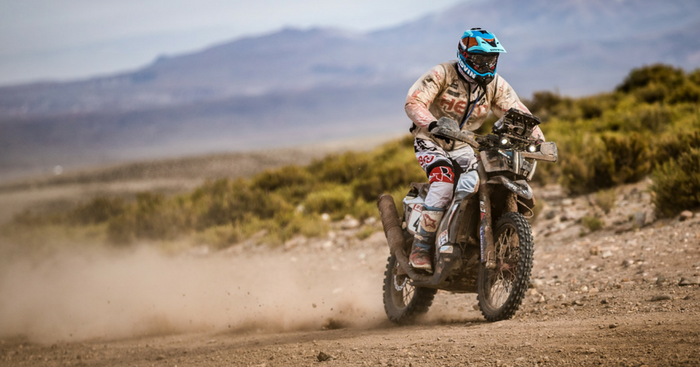 Having spent a night at Uyuni without assistance, the competitors started the leg 2 of the Marathon stage from Uyuni to Tupiza for the longest stage of the Dakar Rally. The riders had to make a total run of 498 km in the special stage followed by an 87 km liaison section. The stage offered the challenge of tough high altitude riding in the mountain sand dunes at 3500 m above sea level. Both the riders delivered solid performances to close the Marathon stage in a strong position for the team. Oriol Mena finished the special at 12th position, defending his top 20 ranking and grabbing up the 18th spot overall. Santosh too has been gaining good ground lately, finishing the tough marathon stage at 38th position. 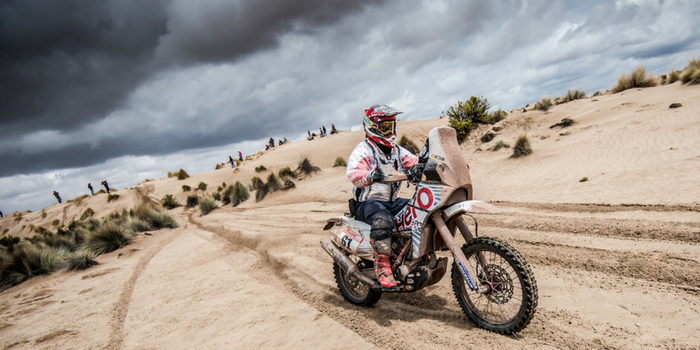 The Heroes welcome the Marathon Stage with absolute determination

After the much-deserved rest day at La Paz, the Dakar Rally went on the road again with the first Marathon stage kicking off from La Paz to Uyuni. A change in software was required for the riders as the landscape changed from sandy dunes to lot of off-pist, river beds and harder ground and the stages become longer and faster from here on. Both our Heroes tackled the stage with a steady head and arrived at the Uyuni bivouac safely, though deprived of any assistance from the team for this overnight halt as per the regulations of the Marathon stage. Oriol Mena had another good stage as he finished the stage at 17 position, allowing him to break into top 20 rankings. Santosh also had a good day, finishing today’s stage at 39th position and an overall ranking of 40 at the end of stage 7. 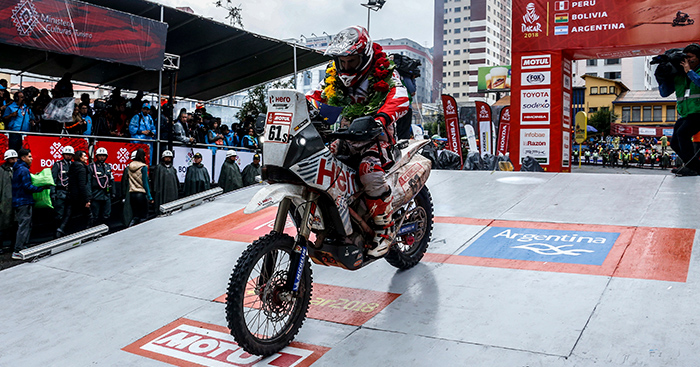 Bolivia's welcome was a warm yet wet one as our Heroes made their entry into the first part of the 6th stage to La Paz which was cancelled owing to bad weather and foggy conditions. The revised 6th stage was limited only to a 194km of timed section today, from the originally planned stage of 313 km.

Oriol Mena continued his solid run, finishing the stage at the 23rd position while CS SANTOSH continued his resurgence in the rankings, closing in the stage at the 38th position. Our Heroes will now get a much-deserved rest day on 12th January, to rest their wounded and tired bodies and minds before the second leg of the rally kicks off. 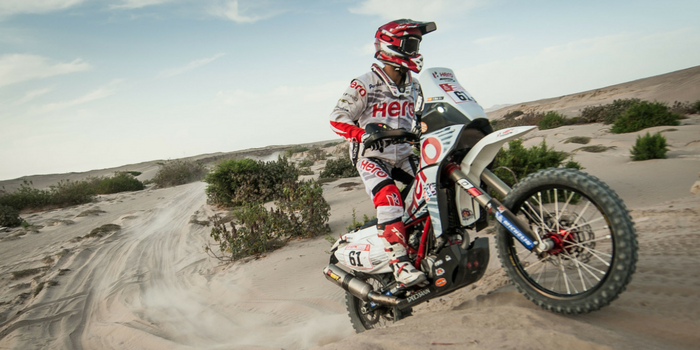 5th stage kicked off from San Juan De Marcona to move to Arequipa, rally’s last stop in Peru before the rally moves into Bolivia. Oriol Mena looked like a man on a mission as he clocked in his best stage of the Dakar yet, finishing at 11th position, his second top 15 stage finish. CS SANTOSH decided to play it safe and steady as the rally nears the halfway mark to finish the stage at 52nd position. 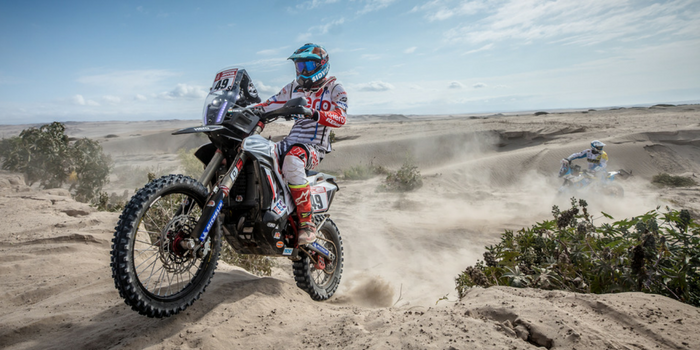 The fourth stage of the Dakar Rally camped itself in San Juan De Marcona for one more day of dunes and navigation. Both the riders pushed hard today to overcome this tough stage for the team. Oriol Mena continued his fine form of yesterday to begin the stage well with but lost some time in finding a waypoint in the later part of the stage, finishing the stage 33rd, which now places him at 24th position overall. CS SANTOSH came out with a purpose and rode hard to cover a lot of positions today despite a nasty crash in the 2nd half of the stage. He gained over 40 positions on his overnight ranking of 98, to finish the stage and overall at 56th place. 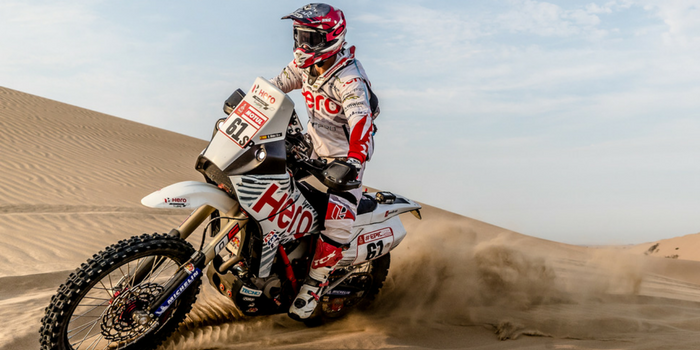 Stage 3 saw the Dakar Rally moved from Pisco to a very windy and dusty San Juan De Marcona. Mainly off-piste with the terrain offering 63% sand dunes, the stage was over a total of 504 km with a Special Stage of 296 km followed by a 208 km Liaison.

It turned out to be a very good stage for Oriol Mena, who overcame tough navigation clock-in. Mena finished the Stage 3 in Top 15 at the 13th place while breaking into the top 20 in overall rankings with a 20th position. On the other hand, C S Santosh had a forgetful day as he ran out of fuel, 30 km short of finish due to a loose fuel cap. As a result, he lost a lot of time today and slipped further down in the rankings, closing the stage at 57th overall. 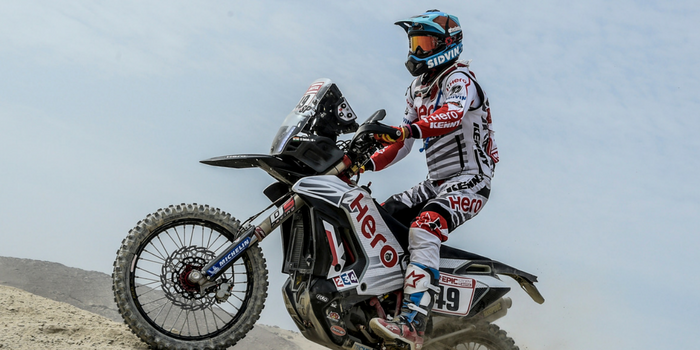 The second stage was the first full length stage of the Dakar with a short 12km liaison section followed by a 267 km loop of Pisco. Competitors were challenged by the tricky canyons in the first 40 km of the stage made only tougher by the series of dunes that followed. With a tough stage on the cards, both the Hero riders decided to be cautious and steady. Oriol Mena finished the stage at 27th place and CS at 29th. 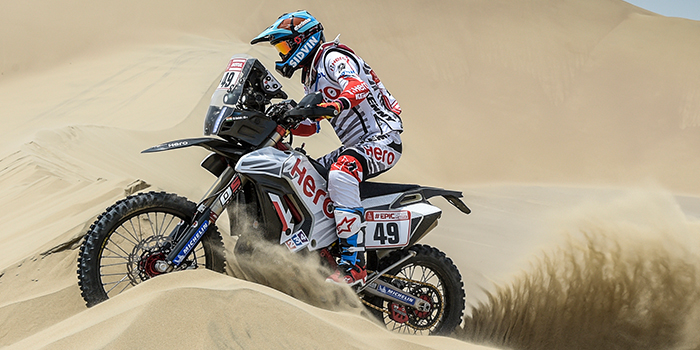 After a long liaison of 242 kms, the short 1st special stage of 31 kms was kicked off from Lima to Pisco. CS SANTOSH started strong on his 4th Dakar outing, closing the day with his best ever Dakar stage finish at 13th position. Oriol Mena made a cautious start to his Dakar dreams and finished at a stable 22nd position. An unfortunate crash at the half-way mark of the stage brought an abrupt end Joaquim Rodrigues’ participation in this year’s Rally. He was rushed to the hospital where initial scans showed no signs of any major injuries. He is now recuperating. 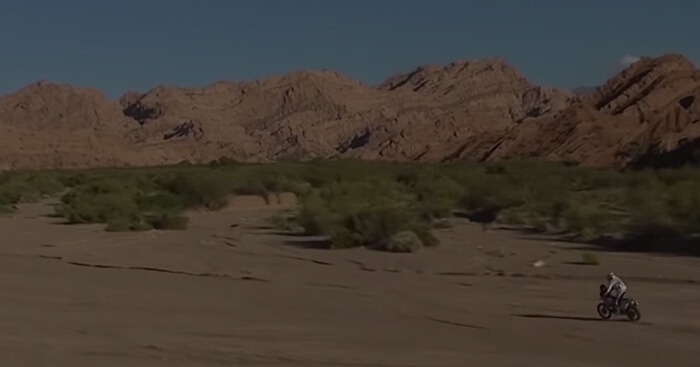 Race the Limits at Dakar

Get a sneak peek of the action ahead 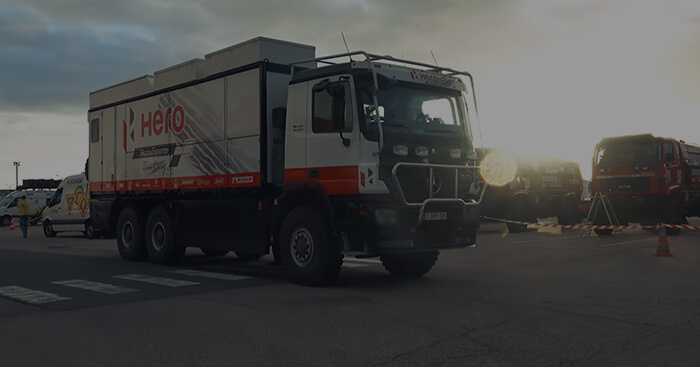 Journey of the Team to Le Havre 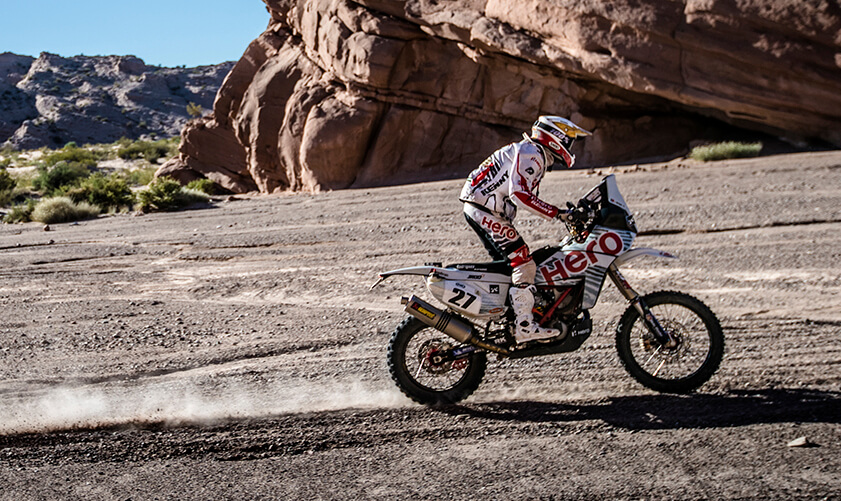 Hero MotoSports Team Rally had an impressive debut year with the distinction of being the only manufacturer team with 100% arrivals in all participated rallies at the 2017 edition of the Dakar Rally.

Rodrigues exceeded expectations by claiming a highly coveted 12th place finish on his first Dakar appearance. Santosh, our second team rider too finished in a highly creditable 47th place to make it a near perfect Dakar. 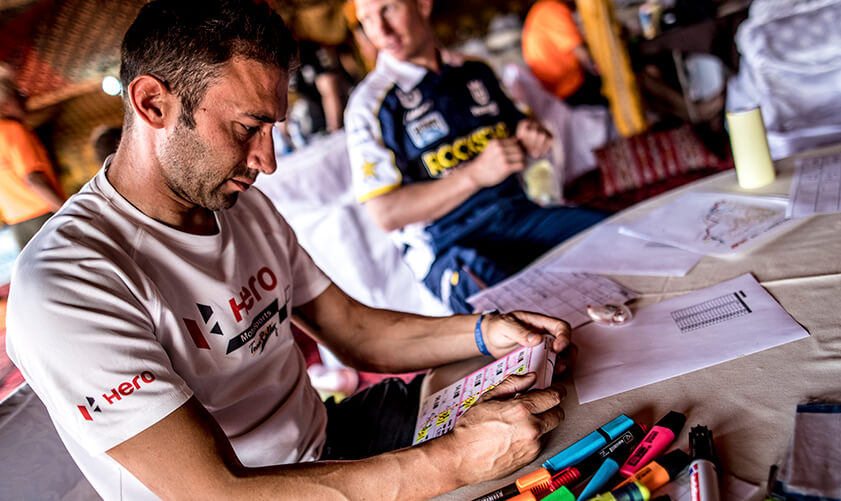 Journey of the Man so far

The last race for the Team was in October this year. Since then the riders have been under intense training sessions to improve their mental and physical fitness since their Dakar 2017 performance. They had a good run on the new bike at OiLibya. 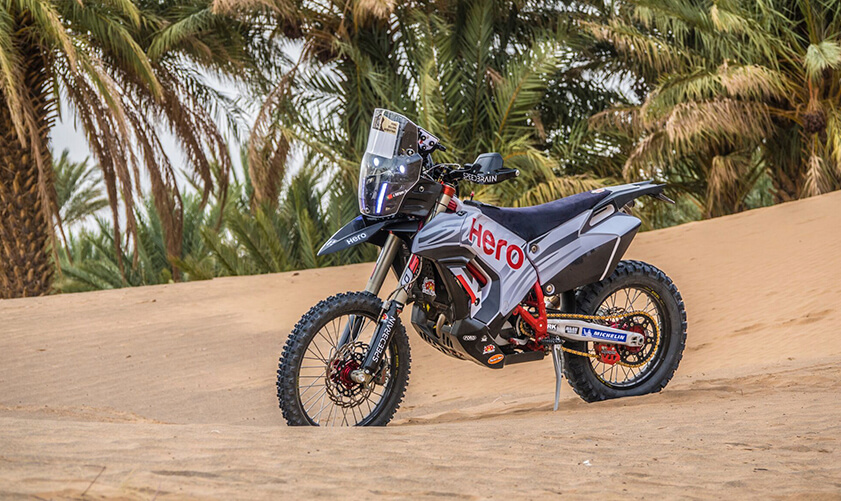 A sneak peek of the Machine's journey.

The new ‘Hero RR 450’ rally bike will also be making its debut at the Dakar this year. The new bike is an upgrade of the well-proven rally bike from last year, with new design and styling of tank, body parts and front section to improve mass centralization, handling and riding ergonomics.