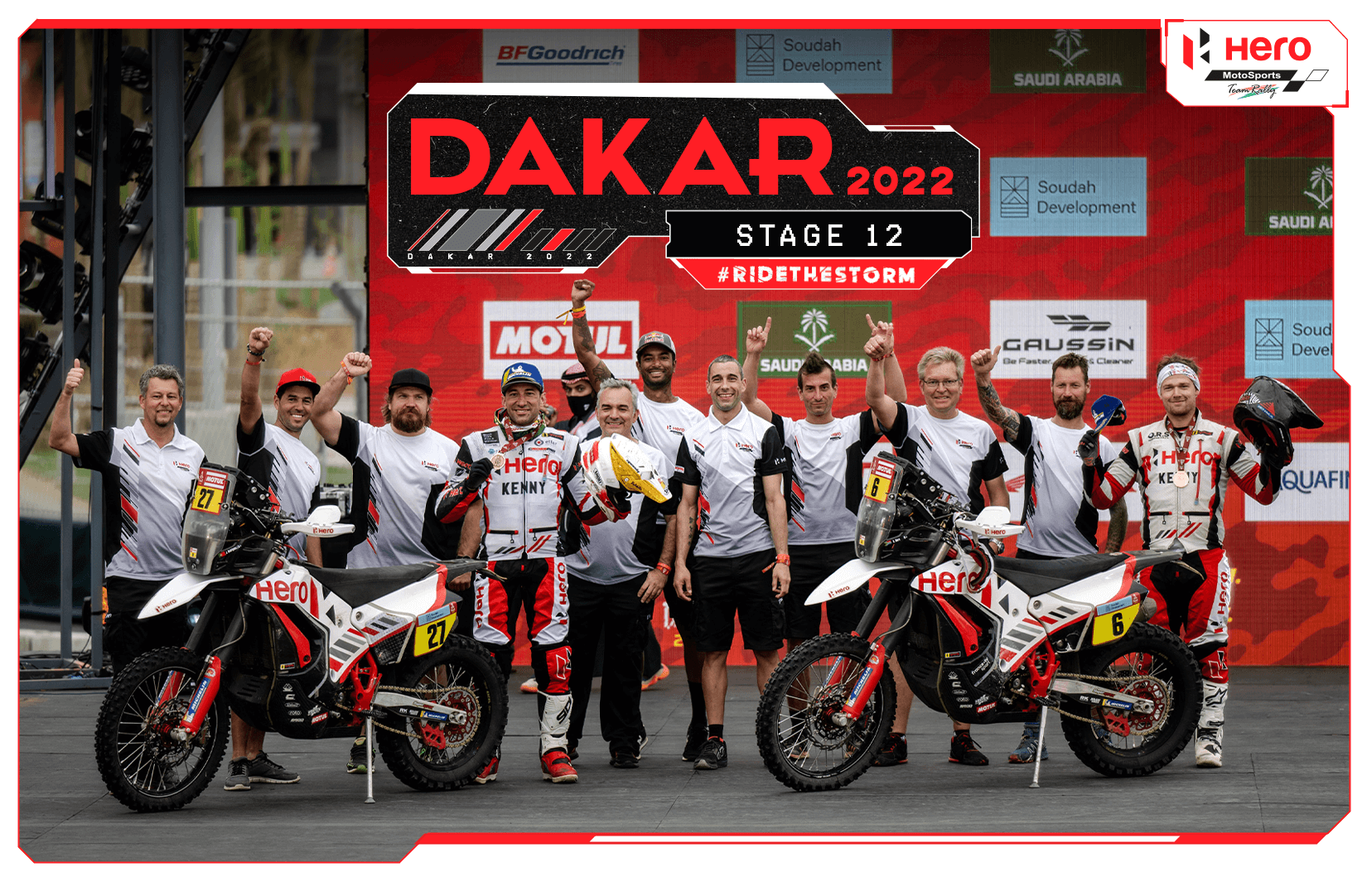 Hero MotoSports Team Rally, the motorsport team of the world’s largest manufacturer of motorcycles and scooters - Hero MotoCorp, completed its Dakar 2022 campaign with a stellar result as both team riders crossed the final finish line in Jeddah.

Dakar 2022 will go down in history as the edition that saw an Indian manufacturer win a Stage in the world’s toughest rally for the very first time!

With one stage win and one stage podium, this has been Hero MotoSports’ best-ever performance at the Dakar Rally so far. This was the team’s sixth consecutive appearance at the rally.

All through 2021, the team participated in multiple races, constantly upgrading their machines, and reaching the top positions. They entered the Dakar Rally battling several last-minute hurdles - including two of their riders getting unfit for the race due to injuries. The Dakar 2022, however, turned out to be a watershed moment for the team and Hero MotoCorp, as the team overcame challenges and achieved a historic result. Having won the hearts of fans around the world, the team has been receiving congratulatory messages all day long.

Joaquim Rodrigues, the star performer of the team, finished the last stage of 163 kms between Bisha to Jeddah with yet another top-15 finish.

For JRod, who lost his brother-in-law and mentor Paulo two years back at the Dakar, walking back into the same event each year has been a battle with himself. After making it to the podium of an FIM World Championship race in 2021, JRod entered Dakar 2022 with great confidence. Riding stronger than ever, he delivered his best ever performance at the Dakar - bagging his maiden stage win and also a 3rd place stage finish – which he dedicated to his mentor. He goes back proud from his fifth appearance at the Dakar with a 13th position in the overall RallyGP class rankings.

Having performed consistently throughout the Rally, Aaron Maré was not far behind, securing 15th place in the overall standings of the RallyGP class.

Even though Aaron Maré joined the team as a last-minute replacement for injured Franco Caimi, he adapted with the team and his new bike quickly, and proved to be a great team player. His consistent and praiseworthy performance this Dakar has earned the young rider attention from far and wide.

With seven of the world’s top manufacturer teams battling for the top prize, Dakar 2022 was the most competitive edition ever. 12 grueling stages and over 8000 kilometers later, the Hero Rally 450 machine proved its mettle yet again with no technical failures.

Even though the team rode with only one of their original riders JRod, the presence of CS Santosh at the camp greatly boosted the team’s confidence and morale. With eight top-10 stage finishes - including a 1st and 3rd position - the team flies back from Jeddah, far more confident than they were at arrival two weeks back. 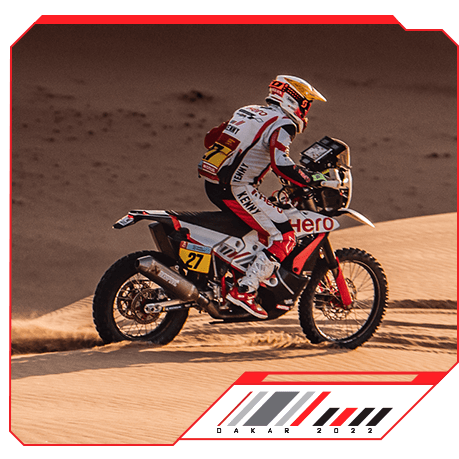 The team will next be seen in action at the second race of the year under the FIM World Rally Raid Championship, at the Abu Dhabi Desert Challenge in March 2022. 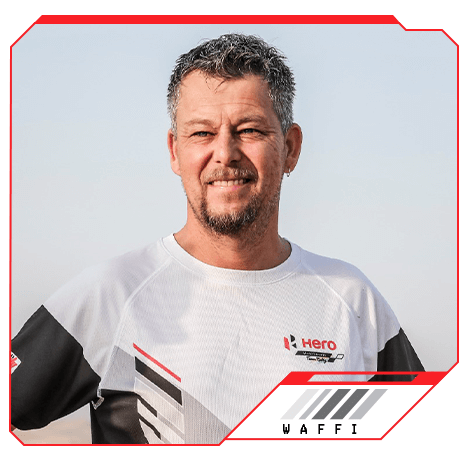 “We are really proud of the performance of our riders, bikes and the team - a superb job done. The highlight was definitely the maiden Dakar stage victory for JRod and Hero MotoSports. Aaron did a perfect job, adapting seamlessly with the team, and keeping a cool head always, he proved to be a fast learner and team player. We look forward to the next W2RC race in Abu Dhabi, and the soonest return of our mates Basti and Franco. Thanks to the Hero family and all our partners who contributed to our success story - to be continued!” 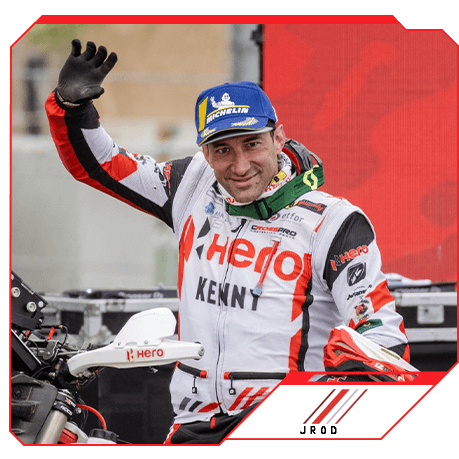 “Extremely happy to be here! I’m really happy with my performance – it was a great Dakar for me and for the team. With the fantastic performance of the Hero Rally 450, we’re together now fighting for the top positions. My win this time is definitely the cherry on the top for me, and I can’t express how happy I am for myself and for the team to have finished yet another Dakar!” 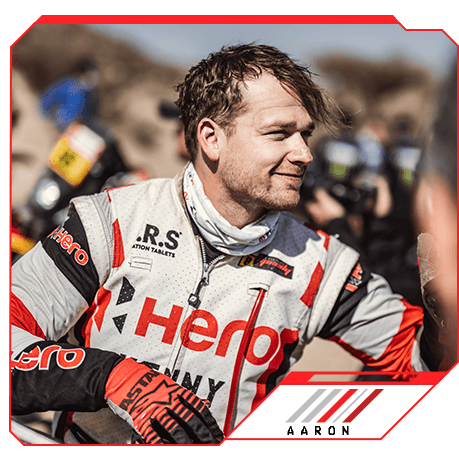 “I’m beyond happy, it’s a dream come true! It’s been the longest 163 kms of my life in the last stage. It’s the end of a successful Dakar. I took it easy today, riding smooth and avoiding any mistakes or crashes. It’s been an overwhelming experience for me, and I’m very grateful to Hero MotoSports Team Rally for their confidence in me, and for all the hard work they’ve put in.”